Music and Lyrics By Emmy Creigh

Sam Says: This song was written by my little sister, Emmy. It is about our maternal grandfather, Harry Oswalt, Sr. He was an inventor of farm implement machinery, mostly for the cattle-feeding industry. In his spare time, he loved to fish and hunt birds. Around 1935, he and my grandmother, Irene, bought a cabin and 10 acres of rock at the intersection of the Gunnison and Lake Fork Rivers in Colorado. The cabin had been built high above the riverbed and into a sharp cliff on the old hand-built Mormon Trail roadbed. It was the Oswalt family cabin and fishing lodge for the next 25 summers. The cabin site is currently under water--a result of the damming that created the Curecanti National Recreational Area. 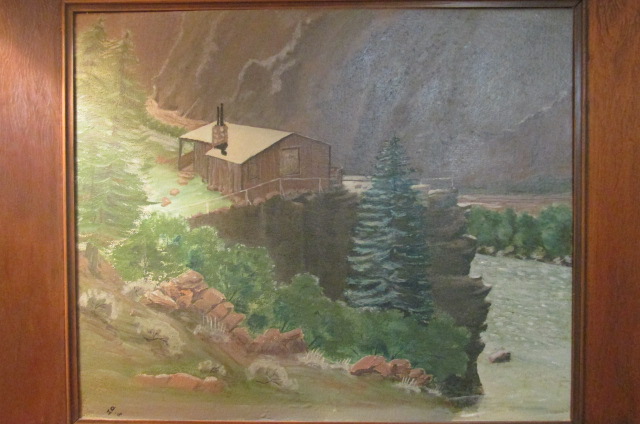 "Granddaddy's Cabin" Along The Gunnison River, painted by my grandmother, Irene Oswalt, most likely in the 1950's.

To the Colorado canyons we'd head when school let out

Feed the chipmunks, wade the streams, and savor every day

In Granddaddy's cabin along the Gunnison

He spent his summers fishin', tyin' flies and havin' fun

But they dammed that river in the Fall of sixty one

So he boarded up his cabin along the Gunnison

He'd take us to the river where fishin' skills were taught

But cities have their hunger, and power they must make

So they turned the mighty Gunnison into a quiet lake

Piece by piece he carried out everything he could

The water's risin' every day and the fishin's no damn good

But leavin' his old cabin was just too much to bear

And his heart they say gave out that day

But I think he left it there

In Granddaddy's cabin along the Gunnison

He spent his summers fishin', tyin' flies, and havin' fun

But he died that winter--his river days were done

But his heart's still in that cabin along the Gunnison

Yes, his heart's still in that cabin along the Gunnison