Sam has become a member of the Mallets Bay Music group pursuing some song placements in film, TV, advertising, etc.

The main contact at MBM is Glory Reinstein, and she handles many Vermont artists.

Announcing The Release Of Wanted Man 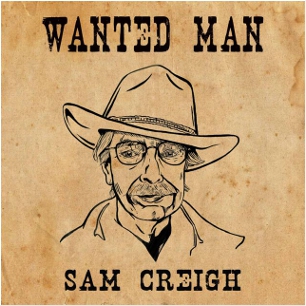 (Click here for more info and to purchase the album)


It contains new and fairly new songs written by Sam, as well as songs

he has chosen to cover by the album's Co-Producer, Mick Leonard,

Roger Marin. Many of the same musicians who performed on Sam's

The artwork is by Sam's daughter, Wesley Fawcett Creigh.

This is an eclectic group of tunes, ranging from Country to Folk Protest

to Pop, Rock, Bluegrass and Blues. The focus for "Wanted Man" is well-written songs

that are produced with the most modern techniques available.

Click here for more info and to purchase the album!

Sam is currently recording a new album, and he plans to have it completed

in the latter half of this year. Stay tuned for the announcement of its release.

for this project, so get ready for some great new tunes!

You can follow Sam and other local musicians every month in CiderMag.

Get the rundown on who's playing where in Vermont and New Hampshire,

as well as profiles on the performers and venues.

A Note From Sam:

This bridge was one of several in Vermont to get washed away by the
intense river flooding caused by Hurricane Irene. It appears in
several scenes in my "Green Mountain Flyer" music video.

A new covered bridge has been constructed to replace the one lost in the Irene flood.

It is now open to traffic.